The 2017 F-Class Individual World Championships event was memorable — with thunderstorms, tight competition, and wicked winds on the final day.

Over the two days, 8-shooter squads competed in the major international challenge match while 4-shooter teams vied for honour in the Rutland match. Aussie F-Open shooters were victorious and took out a solid win for Australia in the 8-shooter F-Open match. Team USA F-TR just beat the Australian F-TR squad with a come-from-behind victory over a very strong Australian team.

It is a great privilege for Australian Munitions, as ADI World Class Powders, to be involved with such enthusiastic and skilled members of the hunting and shooting community. 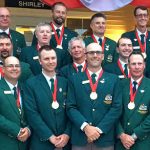