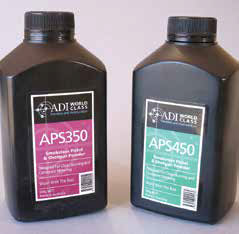 In the late 1990s the Australian Government decided to upgrade the propellant factory at Mulwala in southern NSW, from the 1940s-era operation to a modern facility. At one stage there was talk about quitting Mulwala in favour of building a plant at another location and relying on imported propellants. After years of contracted political, environmental, commercial and legal argy-bargy, as well as millions of taxpayer dollars, the Commonwealth has finally completed the transformation – at Mulwala. The task for designers, builders and operators of the new unit was to manufacture propellants in a facility that’s environmentally friendly, efficient and safe, at the same time maintaining reliable output to meet demand.

The primary role of the Mulwala facility is to produce propellants for small, medium and large calibre ordnance, as well as explosives and rocket motors for our Defence Force. As such, the factory remains Commonwealth property, albeit operated by private enterprise – Australian Munitions, part of Thales Australia. To fulfill its Defence obligations, a large proportion of propellant goes to the nearby ammunition factory at Benalla, also part of Australian Munitions.

Apart from Defence requirements, there’s another imperative in the company’s business plan and the Mulwala Propellant Facility is also providing small arms powders for handloaders and commercial ammunition manufacturers both here and overseas. ADI, as a powder brand, is a carry-over from the days when the plant was owned and operated by Australian Defence Industries, a Government-run business. The brand name is well established and ADI World Class Powders continues to be used on the labels.

The factory recently announced that products were starting to emerge from the new plant, with others due in coming years as the old operation is wound down and decommissioned. Australian Shooter was given the opportunity to evaluate the first powders released for the pistol and shotgun cartridge handloader – APS350 and APS450. 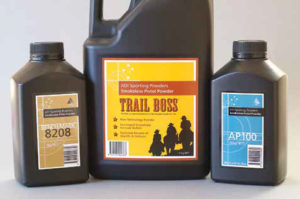 Rod’s most often used ADI powders. Hopefully the replacement for these powders performs just as well.

The 500-gram bottles with large screw-on lids were familiar, each with the ADI logo and colour-coded label in keeping with the established ADI method and featuring updated artwork.

Both APS powders have a light grey colour and consist of flakes a little smaller in diameter and slightly thicker than the AP/AS versions. In terms of density or bulk, a volume of point five of a cubic centimetre (.5cc) equate to the following weights: AS30N 3.22 grains, APS350 3.32 grains, AP50N 3.8 grains and APS450 3.68 grains. Handloaders need to be careful in working up their new loads using the APS products and not rely on previous settings for their AP/AS powder charges.

The chemical and physical science of gunpowder production is interesting and complex. With so many possible combinations of powder granule chemistry and composition, developing a new product can be a drawn-out process. While all manufacturers keep their cards close to their chest, we know in the case of ADI the transition to the new manufacturing process has also involved moving from double-based powder chemistry for pistol and shotgun powders to single-based. Single-based powder contains nitrocellulose as the primary propellant and the double-based version has nitroglycerine added to the mix.

Nitrocellulose powder is also made up of other components added to the propellant formulation during manufacture in varying proportions. These may include deterrents to regulate burning rate, stabilizers to control self-decomposition, de-coppering additives to slow the build-up of copper in the barrel as well as flash reducers and wear-reduction additives.

Graphite is sometimes used as a lubricant to stop powder granules from sticking together and to control static electricity. The number of different chemicals in varying proportions and physical shape and size of the granule all contribute to the powder’s overall performance. In the case of the APS line, diphenylamine is the main stabilizer used to prevent the build-up of deteriorating material and other ingredients present include potassium compounds to reduce muzzle flash.

The new powder appearance alongside the old.

While I don’t have the facilities to test the accuracy of the burn rate claim, I’m not sure they can exactly replicate the old powders in terms of their application, particularly when comparing velocities and pressures.

The supplied pistol loading data gives some recommended loadings with a variety of bullet types and weights from research done at the Australian Munitions testing range at Mulwala. Simply comparing the velocities of a given load of say AP50N to its ‘equivalent’, APS450 does not exactly equate. For example, a 9mm Luger load consisting of a 115-grain lead bullet with the maximum recommended load of 4 grains of AP50N gives a velocity of 1110fps, whereas the maximum recommended load for the same bullet of 3.5 grains of APS450 produces 1018fps with both exhibiting much the same pressure in psi. So why the fuss over 92fps if everything else is equal?

The difference between the two comes when you multiply bullet weight by velocity. This is important when trying to achieve projectile energy level or power factor. Power factor is the product of bullet velocity and weight that produces a number, in the case of the above example 127650 and 117070 respectively. The lower figure is below that required by many pistol disciplines, whereas the higher figure is more than adequate for both Service Pistol and IPSC (minor power factor) competition. While it’s important to make the distinction, the power factor issue for 9mm Luger loads is by no means the only criteria on which to base an evaluation of these otherwise versatile powders.

Both pour well and meters through manual and automatic powder handling equipment smoothly. Despite the smaller flake size, it didn’t appear to be electrostatically attracted to the plastic parts of various manual and progressive presses – a big selling point. There was no sticking or build-up of powder and it flowed through rotating and sliding parts of the presses smoothly. 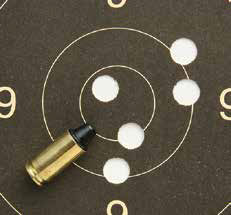 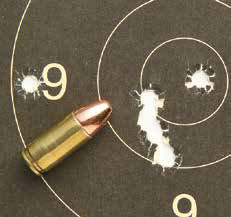 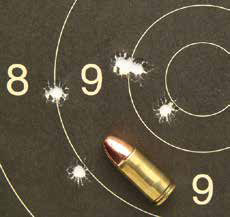 I put together a few 9mm Luger rounds using moderate loads from the supplied loading data and headed to the range. This initial firing was not intended as a load developing exercise so much as to simply monitor handling, slide operation, feeding and ejection, cleanness of burn, pressure signs and velocities over the chronograph.

I loaded and fired five rounds each of 2.5g of APS350 with a 115g conical lead bullet and 3.1g of APS450 with the same bullet. Each was fired from a S&W M&P with factory supplied springs.

While the velocities equated closely to those published in the data sheet and the accuracy was satisfying, there were a few operational issues with the APS350 loads. With the 115-grain projectile they only achieved around 900fps and that wasn’t enough to reliably operate the slide on every shot; not picking up the round from the magazine and not leaving the slide locked back after the last shot. The APS450 loading had enough energy for faultless operation in the M&P and accuracy was adequate, without going into serious load development.

I was happy there was no unburnt powder left in the gun. There was almost no residue in the barrel and cartridge cases were not excessively dirty. However, the primers were quite flat. I used the softer Federal 100 small pistol primers I would normally use in revolver loads. Felt recoil was comfortable in all cases.

For my next range visit I used harder Remington 1½ primers and a wider range of bullet types and pistols in various combinations. I opted for a number of loads closer to the maximum recommended and recorded the results. The pistols used were the S&W M&P, H&K UPS Elite, Grand Power X-Calibur and my Walther P1. All had as-issued recoil springs. The projectiles were the Hawkesbury River 115g lead conical, Black Widow 115g round nose, Hawkesbury River 100g lead semi-wadcutter and X-Treme 124g coppercoated lead bullets.

This time it was more of a war between bullet types and the pistols they were used in. Generally the groups shrunk with the higher velocities, although the H&K preferred the copper coated bullet over the cast lead. All firearms functioned faultlessly. The harder Remington primers still showed signs of flattening out but not dangerously. Again, pistols were clear of unburnt powder and excessive residue. Velocities were consistent with each load with little velocity spread in any of the loads. Some more load developing is called for but the best results in this session were with the following combinations: 3.8g of APS450, 100g lead SWC at 1165fps shot in the S&W M&P 3.5g of APS450, 124g copper coated at 990fps shot in the H&K UPS Elite; 3.0g of APS350, 115g lead round nose at 950fps shot in the Grand Power X-Calibur; 3.1g of APS350, 124g copper coated at 907fps shot from the Walther P1. These results gave a good starting point for further load development. 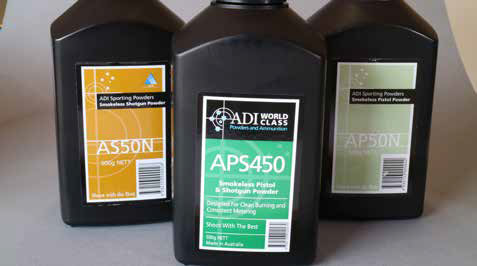 The old AP/AS powders alongside their replacements.

Australian Munitions say the APS series propellants will eventually consist of two designs, the APS350/450 propellants reviewed here, and a new design powder covering the AP70N to AP100 burn rate range. The next APS design will initially consist of APS650 (AP70N equivalent) and APS950 (AP100 equivalent) and is expected to be ready for commercial release later in 2018. These products will incorporate the latest burn-rate modifier technology and, according to ADI’s promotional material, will have improved loadability and ballistic performance.

At time of writing the transition of the current AR22-series rifle propellants is in progress. During the switch, supply will be maintained as the old plant continues to operate. ADI says replication of the AR22-series designs cannot be transferred directly from one plant to another to achieve the same performance. Again, the aim is to capitalise on the technology in the new unit with modernised formulations and granule shapes.

The new family of propellants will be called the AR28-series which will incorporate a new burn-rate modifier technology, a de-coppering agent to inhibit build-up of copper in the rifling of barrels, improved metering and higher velocities, still retaining the ballistic temperature independence technology that has been a major selling point of ADI powders. Not forgetting its military responsibilities, Australian Munitions will bring new military technologies on board such as even further reducing fouling and muzzle flash.

I use ADI powders exclusively. The versatility means I can turn to products such as BM8208, Trail Boss and AP100 in a range of pistol and rifle loadings. The continuity of supply and range of powders puts Australian handloaders in a privileged position. The reality is we, as Australian ammunition reloaders, consume just a fraction of the factory’s output. Demand for ADI products in other parts of the world is immense and ADI exports a range of propellant to the US where the Hodgdon Powder Company rebrands them. Because of that demand I’m sure we enjoy a wider range of powders than would otherwise be produced for the Australian domestic market.

Reprinted from Australian Shooter and used with permission of the Sporting Shooters’ Association of Australia.