ADI powders and the SSAA

ADI powders and the SSAA 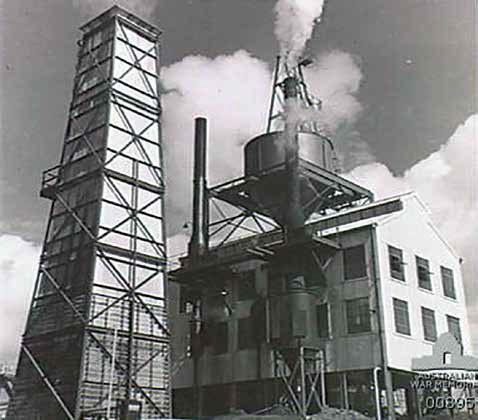 The 1940s nitrocellulose plant at Mulwala.

For almost 40 years, the pages of Australian Shooter magazine and its predecessor, the Australian Shooters’ Journal, have carried articles, reviews and advertising for what we know today as ADI Sporting Powders. What is not that well-known is how a small band of SSAA members were instrumental in helping the Mulwala Explosives Factory produce commercial powders for sporting shooters.

Documents supplied to Australian Shooter reveal how both the factory and shooters were to benefit from a cooperative plan that would see the manufacture and supply of powder continue in times between military conflicts, while at the same instance developing a wider range of rifle powders for sporting purposes.

Correspondence between a number of government departments, politicians and the factory itself show that members of the SSAA had been lobbying for a continuous supply of a wide range and consistently high-quality propellants for sporting shooters who handload their own ammunition.

Over years of restructuring and with various changes of governments, the Mulwala Explosives Factory has had numerous owners and operators, being government, government-owned or private. One such operator was indeed called Australian Defence Industries Limited, hence ADI, but that was only one of the many corporate identities in recent times. Today’s operator of the factory, Australian Munitions, continues to this day to market its commercial powder products under the name ADI, maintaining the brand we all have become familiar with. Historically, propellant and explosive production has been governed by Australia’s military requirements. After WWI, the winding down of military expenditure reduced Australia’s propellant and explosive output capability. By 1928 the only production facility that remained was the cordite and explosive factories in Maribyrnong, Victoria. 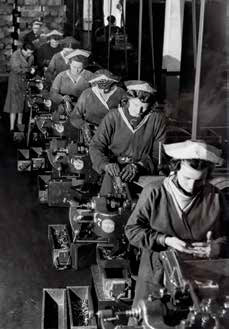 With the outbreak of WWII bringing a need for greater propellant-making capacity, it was decided Australia should begin manufacturing the American smokeless (single-base nitrocellulose) powder rather than traditional British cordite. Although single-base propellants have been around for nearly 100 years, it wasn’t until 1942 that approval was given to construct a new powder plant at Mulwala on the Murray River in New South Wales. Building began in late ’42 and production started in December 1943, equipment and know-how being provided under the USA’s Lend- Lease Act.

In the late 1950s Australia was considering a new infantry rifle to replace the bolt-action SMLE .303. The rifle selected was the FN-FAL gas-operated Self Loading Rifle (SLR) and it was adopted by the Department of Defence in 1959. This new rifle required different ammunition to the .303 British cartridges and the Mulwala Explosives Factory would supply the powder for that ammunition. 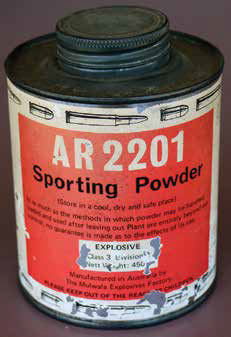 At the end of Australia’s involvement in Vietnam in the early 1970s, the production of arms was again curtailed in the country, as was the business of making the ammunition to go in them. The manufacturing of propellant also suffered and, with the inevitable staff redundancies, there was pressure on the government to commercialise the ordnance and armaments industries to keep the machines running, maintain employment and to be profitable, or at least keep the business viable.

The Federal Government decided to produce Mulwala’s powders commercially for civilian use. However, the Mulwala plant only rolled out one rifle powder. Designated AR2201, it was specifically designed for the L2A2 7.62 NATO cartridge for use in the SLR. At the same time there was an on-going problem for the growing number of Australian shooters who handloaded their own ammunition, namely the unreliable supply of powder, all of which was sourced from overseas, notably from Winchester, Nobel, DuPont and Norma.

The Department of Productivity, operator of the factory at the time, expanded its propellant production and released AR2201 rifle powder to recreational shooters by means of a network of wholesalers and retailers. Wholesalers would receive powder in 30lb (13.7kg) kegs, which they would repack into smaller quantities to sell to retail customers then on to the end users.

This virtually guaranteed continuity of supply of a locally-produced powder, but it was still only one powder. Nevertheless, the SSAA Sydney Branch provided testing and feedback to the Mulwala factory so that reliable data could be collated and published in reloading pamphlets.

A downside of AR2201 for handloaders was that it was not a true ‘canister’ powder. In other words, the powder varies marginally from lot to lot. This means whenever a handloader changes from one lot of powder to another, a session at the range is required to develop a load that replicated the previous lot. This could mean a difference in as much as four or five grains of powder to achieve the same velocity.

Of course, this powder was intended for factory loading service ammunition where testing is done routinely whenever there is a change in powder lots. But as handloaders we don’t have the time or resources to do this every time we buy a new bottle of powder. However, for the time being AR2201 was a popular and reliable substitute for the foreign imports.

Coincidently, it also eventuated that the military was becoming unhappy with AR2201 in the L2A2 7.62 NATO ammunition. While there was no problem with accuracy, the issues were more to do with the burning properties of the powder and, in particular, the pressure spike created as the powder burnt and that was having an adverse affect in the operation of gasoperated firearms. 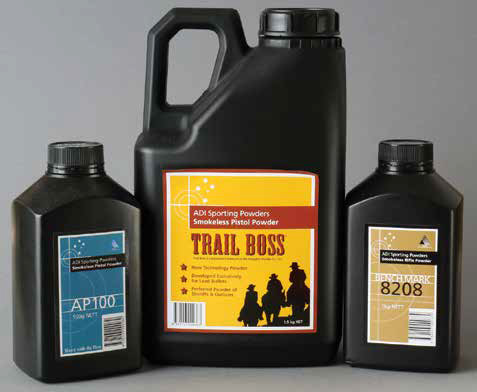 A range of current ADI powders.

In 1979, AR2201 was replaced in the SLR by a new powder – AR2206. Designated the F4 Ball, the new cartridge with the new powder had the same ballistic performance as the AR2201-filled L2A2 round but with lower breech pressure. AR2206 not only had a lower chamber pressure but also raised the critical gas-port pressure, resulting in more reliable self-loading operation.

Apparently, Australian Army Ordnance was also unhappy with the hot-weather performance of the L2A2 round in the SLR. Early tests showed that at very high ambient temperatures AR2201 would have increased breech pressures, almost to the point of being dangerous, whereas AR2206 did not change much at all in excessively hot conditions. This made AR2206 the first powder designed to be heat resistant and something the Mulwala plant continues to develop in all its products.

But it is the recent history that is of most interest here. In a letter dated October 23, 1978 from Ian Macphee, Minister of Productivity, he revealed that: “Manufacturing rifle powders, other than AR2201, for commercial sale has been under consideration for some time.” This followed an extensive market survey carried out by the Department of Productivity in which the SSAA had huge input. This was what recreational shooters had been waiting for.

The factory did indeed produce four fresh powders based on the new formula for the recreational shooter. These powders were to be called AR2206, AR2207, AR2208, AR2209 and a double-based shotgun powder – AR2051 – was also released. Each would have similar manufacturing processes and ingredients but all would have different burning rates to suit a wider range of rifle cartridge loadings. The SSAA Sydney Branch immediately became involved in testing the new powders. Again, correspondence went back and forth and after some regulation and certification issues, work began on load developing the new powders into a wide series of rifle cartridges.

As it turned out, and despite AR2206 being developed for the military F4 ball ammunition, it was AR2207 to be the first, and fastest-burning, of the new powders tested by the SSAA team. From the early 1980s on the Silverdale Range in western Sydney, SSAA shooters were beginning to test samples of powders with burning rates both faster and slower than AR2201. AR2207 quickly proved itself in cartridges such as the .223 Remington and the 6mm PPC. 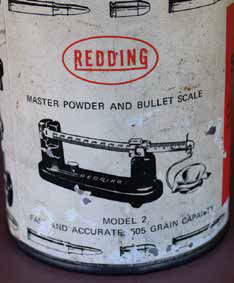 Distributors could advertise their products on the tin.

The plan was to market these new powders under the commercial brand Mulwex – a contraction of the words Mulwala and explosives. With the advent of the new AR2206 family of powders came the necessity to produce them as canister powders. As civilian handloaders were not resourced to carry out load development for each and every new batch of powder they purchased, the factory had to make the powder consistent from lot to lot, thereby increasing the time and cost of production and testing.

Over the following years the Australian Shooters’ Journal carried the results of the testing and plenty of commentary and critique continues to this day in Australian Shooter. Over time, the factory obtained test barrels for a wide array of calibres for their own internal testing but it was the SSAA and its members who provided the rifles and the first results of testing that Mulwex made available to the wider shooting community.

At the time of writing, the Mulwala powder factory is beginning to roll out modern propellant products from a new and updated plant. Thanks to the approval of a multi-million dollar redevelopment program in 2003, products are being created to replicate the familiar powders from the old 1940s plant, plus a few additions to the range. Future issues of Australian Shooter will review these new variants as they are released.

The next time you walk out of the gunshop with some Aussie propellant under your arm, think about how hard it was once to obtain quality handloading supplies in Australia. The availability of today’s offerings of propellants had an interesting beginning more than 30 years ago involving enlightened thinking from people in Mulwala, Sydney, Canberra and, of course, the SSAA.

I greatly appreciate the assistance of Fred Gibbs, former committee member of the SSAA NSW Branch, in preparing this article.

Reprinted from Australian Shooter and used with permission of the Sporting Shooters’ Association of Australia.