During 8-14 November, the 2017 Match Rifle and Long Range F-Class Championships were held at the Stawell rifle range and neighbouring Stawell Clay target complex. Like many club ranges around the country, Stawell has had a colourful history of over 100 years. Between the two world wars, ammunitions were provided for free to the range but as the threat of war diminished, the number of shooters at the range dropped off and the ammunition was no longer free. The rifle club purchased the range from the Commonwealth and the Clay target complex was built on the dried up tailings dam of the Stawell gold mine.

This year, ADI World Class Powders and Ammunition sponsored the Victorian and the Australian Match Rifle and Long Range F-Class Championships. This competition is shot over 1000, 1100 and 1200 yards.

Forty-four of the best long range shooters from all over Australia competed in the Victorian Championships. The winners were:

The grand finale of the Australian Match Rifle and Long Range F Class program is the State Teams events for both Match Rifle and F Open. For 2017, the weather proved HOT with the first real burst of summer (37°) deciding to hit Stawell on the first day of the Teams events. Thankfully, some gazebos were sourced to provide shade at the firing point and some breaks provided between events for the markers to rehydrate, which enabled the program to go ahead as planned.

The first is the Maloney Match, which is a no sighters and 16 shots to count at 1200 yards for each of the team’s four shooters.

The major MR State Teams event is the Rowlands Trophy. The donor of this trophy, Reg Rowlands, was one of the founding members of match rifle shooting in Australia and before the start of this event, MR shooters paid tribute to his memory and his passing earlier this year. Comprising 15 shots at 1000, 1100 and 1200 yards, the scores were close after the 1000 yard range.

The President’s Trophy for the highest scoring shooter and coach in the Rowlands Match went to Shane Courtney and David Rich (VIC), who dedicated their win to their friend, mentor and former Australian MR Team member, Graham Dyson.

The Victoria match is a no sighter and 16 shots to count at 1200 yards, taken out by NSW. The NSW match was held the following day with 15 shots at three ranges for each of the 3 shooters and was taken out by VIC. The President’s Trophy for the highest scoring shooter and coach in the NSW Match was won by Les Rozsnyai and Greg Warrian (NSW).

A mistake free shoot from Barry Southern (VIC) on the final range gave him the new Aurora Trophy as Match Rifle Reserve champion.

The competition was equally fierce for the Range F Open Championship. At the end of day 2, Tim Manning and Lou Shallis were locked together on 516 points, with Lou leading by only 3 super Xs. Consistent shooting throughout saw the Commonwealth Trophy for National F Open Champion go to Lou Shallis.

Thanks go to the Victorian Rifle Association and the Stawell Rifle Club for hosting the 2017 National titles and particular thanks to Lew Horwood and his wife Kay for all the work they put into organising the event.

Mick Punturiero (SA), shooting in his first national long range championships, dominated day 1. He increased his lead further on day 2 and after the final shot on day 3 he took out the new Southern Cross Trophy as National Long Range FTR Champion. 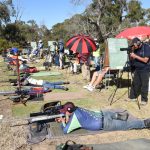