Over the Easter long weekend the 41st IPSC National Handgun Championships was held in Perth WA. This event attracted almost 400 competitors from all over Australia as well as International’s from New Zealand, Czech Republic & Indonesia. The championships consisted of 18 stages completed over 3 days of main competition. Day one commenced with the official opening and then it was into the match.

Brodie competed in the top division of Open where there were 117 competitors. Each day Brodie completed 6 stages. Each stage had challenges such as swinging targets, distance and steel plates. Some stages required shooting from multiple positions (prone and kneeling) as well as strong and weak handed which sorted out a fair few competitors. Each stage was officiated by International (IROA) and National Range Officials (NROA).

Once the dust settled on the last day and after the scores had been posted the Stage and Grade medals where presented at the range. Brodie was successful in taking 9 out of 18 stage wins and addition became the National Grand Master Grade champion.

On Monday night the official dinner was held at the Perth Hyatt where Overall and Team champions were announced. Brodie was officially announced as the 2017 National Open Champion which also brings with it a Presidents Medal. He was also part of the Victorian Gold Open Team that was successful in taking out the Gold Open Teams.

During the presentation the Teams for the IPSC World Shoot to be held in France in late August was announced and Brodie was selected to represent Australia in the Open Team for this match.

Brodie would like to thank ADI for their ongoing support of him and help in with powder for his new load that was developed for this National Championships. His new load incorporates the use of AP70 and makes for a very clean and soft load in his Open handgun.

What’s ahead for Brodie? Well he has the IPSC Queensland Championships coming up in June and then the IPSC World Shoot in France in late August. In-between Brodie will be running training clinics at his range to teach people the skill’s required to compete in action shooting. 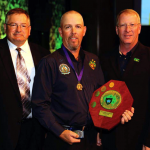