This month Australian Munitions Sponsored IPSC Shooter Brodie McIntosh competed at the NSW State Championships in Albury, NSW. The match had 12 challenging stages to put the over 200 competitors through their paces and use the principles of IPSC of “Accuracy, Power and Speed”. On the completion of the 2 day match and once the dust cleared Brodie was successful in taking out his 11th NSW Open Champion, and 1st Grand Master. He also took home for the outright win the prestigious Presidents Medal supplied by the IPSC World Body.

Last month Brodie successfully won his grade (Grand Master), overall open Handgun Champion and Victorian Open Champion at the Victorian IPSC Championships help at the SSAA Little River complex. This even attracted over 250 competitors from every state in Australia, plus a couple of Kiwis. There was a total of 12 stages split up over 2 days. As this was an IPSC World sanctioned event, Brodie also took home a Presidents Medal for the outright win. This win was Brodie’s 17th Victorian Championship win and 3rd in a row.

Also at this match, Brodie’s wife Amanda competed again after over four years away from shooting. She took out Top Open Lady and Victorian Open Lady Champion. This was a great surprise to her, but shows the skill level of both Brodie and Amanda.

Brodie will be busy putting as many rounds down range as he can before the IPSC Nationals in Perth next month where he could secure his 17th National Championship. 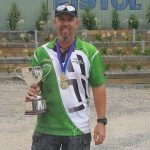 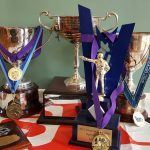