Steve Schrader starts the year off with a bang

Steve Schrader starts the year off with a bang

Developed in 1979 by a former LAPD Police officer who was CEO of a holster manufacturing company Bianchi International, Action Match is a dynamic discipline and involves four firearm classes and four main courses of fire. Each course has its own time, distance and scoring conditions all involving revolver and self-loading pistols. There are several courses in an Action Match competition. These include Practical and Barricade where there are four stages from 10- 35 yards and the shooter faces two targets down range, engaging them with various time limitations.

In Moving Target the competitor needs to engage a target that comes from behind cover and travels at speed before being covered again, there are different distances at each six second exposure time.

Finally there is Falling Plates, this is the most recognisable and unforgiving stage where the shooter engages a 6×8″ metal target in various times and distances, each miss takes away points and multiple misses can destroy hopes of winning for a competitor.

Congratulations to Steve and his team. We wish you all the best for the NSW APA State Titles in April. 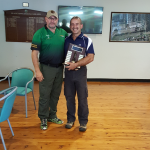