ADI sponsored NSW Action match pistol shooter Steve Schrader continues his outstanding year in shooting. He followed up his win at the NRA Regional Championship; Flagler Cup in Missouri by winning the Barricades at both the NT State Titles and National Titles in Darwin.

It is a pleasure to be involved with Steve and his team, his results are a testament his to hard work and commitment to the sport. We wish him and the SSAA team good luck for the upcoming World Action Pistol Championships held at Whangerei , New Zealand on 8-11 November.

The photos of the targets are from the Barricade event at the National Titles. 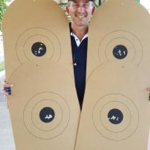