ADI sponsored shooter Steve Schrader is an avid part of the ADI community and is a regular feature on our website for his competitive action match shooting. This month for something a bit different, he shares his recent family pig hunting trip near Nymagee with his daughter, son and best friend. They had a great time, the weather was fantastic and they got onto a few pigs.

Steve was using his 460 Weatherby magnum rifle, trying out a new load of 113grns ADI AR2208 behind a 300grn Barnes TSX projectile with a velocity of approx. 3200fps. The load turned out to be perfect for pigs and they had good success considering that over 320 pigs were shot a few weeks previously when the property owners were mustering goats with a helicopter.

One of the best shots of the trip was when Steve managed to hit a pig on the run at about 80m after the projectile went clean through a star picket post which was about 20m in front of him when he took the shot.

His brother Shane was using a 300 Weatherby magnum loaded with 89 grns ADI AR2217 behind Hornady 165 grn GMX projectiles (approx 3200fps) and Shane pulled off a great long range running shot which was ranged at over 350m. His mate Glenn used his grandfathers synthetic stocked 303 loaded with 41 grns of ADI AR2208 behind 150 grn Sierra soft points.

Steve’s daughter Katrina, used his Weatherby Accumark 30-378 magnum shooting a load of 122 grns ADI AR2218 behind 180 grn Barnes TSX projectiles with a velocity of 3400 fps. She managed to bag one pig and backup on another. 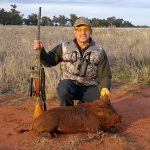 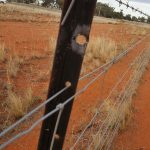 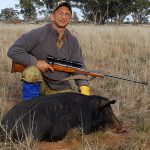 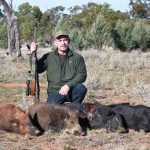 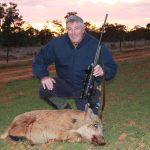 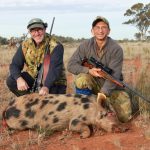